Half way through 2017, one of the largest grid operators in Argentine decided to implement LoviSil® transition joints in its designated region, namely Buenos Aires. After a few years with limited room for investment in electricity grids, grid operators now have greater leeway to work on the reliability of their grids.

Creating reliable grids is now a major priority, and this has been reflected in major investments in infrastructure. The grid operator performed several pilot projects in 2011 and was convinced by the benefits of LoviSil® technology. It wanted a single joint for all cables, which was very reliable and easy to install. During the course of this year, jointers were given on-site training by Lovink Enertech. The used technology was explained in various sessions, while installation was demonstrated in practice.

The selection process was completed with an audit at the production facilities in Terborg. Export Manager Dennis Jansen looks back with satisfaction: “Lovink Enertech continues to implement its futuristic vision and develop durable solutions; and this was highly appreciated.”
LoviSil® joints will be used for all transition joints next year. “This represents an important step for Lovink in the South American market”, says Dennis. 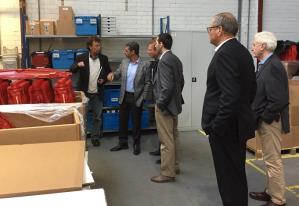