Lovink Enertech is introducing the third generation of LoviSil® cable joints – the M series. The joints have been significantly improved when it comes to installation convenience and logic, which makes the joint better, more practical and easier to install. Technical properties have remained the same because, after all, customers are more than satisfied with the electrical and mechanical properties of LoviSil® joints.

The transparent inner joint is one of the main improvements, and allows actions during the installation process to be controlled effectively. In addition, both the inner and outer joint now feature a filling indicator.

Components no longer need to be fitted in advance, which adds greater flexibility to the installation process and makes it more logical. Furthermore, components are pre-installed wherever possible, like the earthing and screws on outer shells. All components are clearly laid out when the box is opened, in the order in which they must be installed.

The design of a few components has also been improved. For instance, the newly designed tubeset features a click system, and the outer shells feature useful mounting cams. The bags with Protolin® resin and LoviSil® have been transformed and are now fully up-to-date: they now feature handles and a filling spout. The Protolin® resin bag also has a colour indicator, which allows jointers to see when the resin has been properly mixed.

Finally, several components have disappeared completely. For example, Lofit no longer needs to be used when gluing inner shells because a useful hinge fastening and click system help to create effective sealing.  The number of foam rings has been reduced from four to two. The jerry can holder has also become obsolete because a bag is now being used for the LoviSil®.

LoviSil® M joints offer benefits to jointers. Installation has been further simplified and forgotten components, lost screw and fiddling around during the pouring process are now a thing of the past. But the grid operator will also be able to take advantage of these installation benefits. After all, installation plays an important role in determining the quality of connections and thus the reliability of the network.

You can quickly check out all changes in the info graphic. The new catalogue will be released very soon. 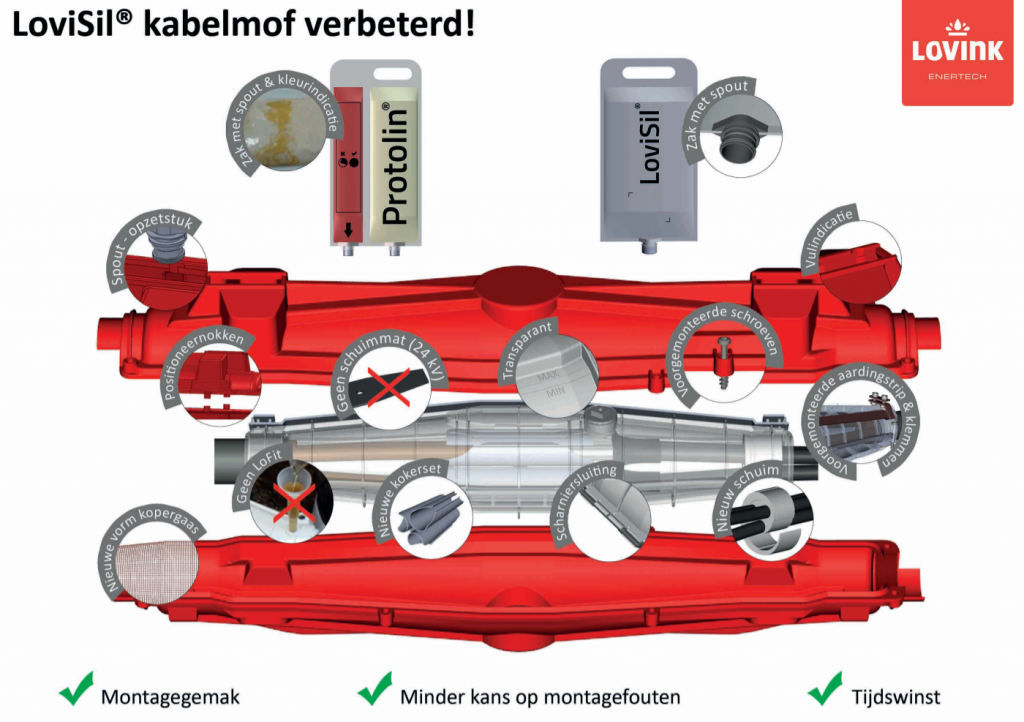