Lovink Enertech was present at the AMEU “Electricity Landscape of the Future” congress in Cape Town, along with its South African distributor, KBK. The AMEU is an association of regional grid companies responsible for the electricity supply across South Africa. The three-day congress provided ample opportunity for visitors to attend the trade fair next door.

New contacts were made at the stand and well-known utilities such as Cape Town Electricity and Eskom were brought up to date on the latest developments. Managing Director Jan Leijen also attended and spoke with a number of interested parties. “The official opening of the congress along with the openings each day provided a good idea of the ‘local flavour’: a procession of AMEU directors, preceded by a string orchestra, ceremoniously walked through the halls to the conference room. All visitors were greeted each day by a colourful band of dancers and musicians who delighted them with traditional songs and dances.”

The most important point on the AMEU agenda was the desire of grid operators to expand and consolidate their electricity networks. An important point of concern here is that grid companies are confronted on a relatively large scale with the theft of network components, especially copper.

Sustainable energy projects such as solar and wind energy are also taking off in South Africa, placing a greater strain on the grid than in the past. The specific benefits and operation of LoviSil® was therefore extremely appealing to many congress visitors. In addition, several engineers visited our stand to find out how easy it is to integrate windmills using a LoviSil® feed-in joint. 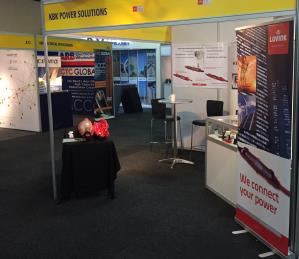