Fruitful participation in exhibitions in Germany and UK

Home/News/Organisation/Fruitful participation in exhibitions in Germany and UK

Fruitful participation in exhibitions in Germany and UK

The first half of the year was taken up with exhibitions; existing relationships were strengthened and new contacts gained in both Germany and the UK.

Focus on sustainable applications at Eltefa and Elektrotechnik

In February and March, Lovink Enertech successfully participated in Elektrotechnik in Dortmund and the Eltefa in Stuttgart. During both exhibitions, there was a high level of emphasis on LoviSil® technology. Our applications for the sustainable energy market were enthusiastically received in the country that leads the way in energy transition. Several new contacts were made and promising talks carried out. Stefan Pap, Account Manager, said: “An exhibition offers you the opportunity to allow relations to discover your products ‘live’”. The LoviSil® joint attracted a great deal of attention and visitors were quickly convinced of the reliability of this connection technique. “

This year CablEx  held at Chester Racecourse, Cheshire, UK was aimed at engineers and buyers working with ‘Underground Power Cables’. Many utility companies from the UK and Ireland visited our stand and discovered the recently-introduced LoviSil®36 kV range and more. The visitors from Western Power Distribution, which have been using our LoviSil® joints for years now, provided us with much positive feedback on the improved M-series joint saying this “Simplification, will have a huge impact”.

Finally, Lovink Enertech once again took part in the international Cired conference and exhibition, which this year took place in Glasgow. A large stand was shared with 12 Dutch Power participants, and where the LoviSil® joint was prominently displayed. This event served not only to strengthen the Dutch contacts, but several new utility companies from further afield also showed an interest in the silicone technologies and application options offered by LoviSil® joints. 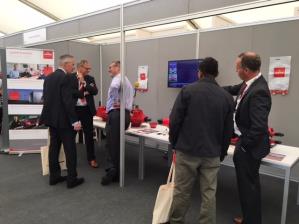 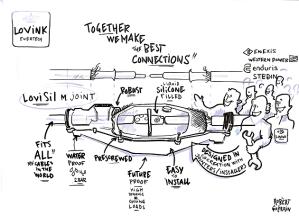