Lovink Enertech resolved a major problem for an energy company in Germany. For quite some time, the company had been experiencing an abnormally high number of malfunctions and high compensating current flows. The LoviSil® cross-bonding joint not only offered a reliable solution, but it also helped to significantly reduce costs.

The underground route features 3 x single-core connection joints, while the above-ground networks/pipes are inter-twined with the railway network. For a while, this meant low-temperature shrinkage joints had to be replaced after malfunctioning. These malfunctions may have been caused by the thermal load on the cable or by high compensating current flows. So the company went looking for a joint that could deal with Ohm losses and guarantee uninterrupted electricity supply.

Lovink Enertech was able to offer a suitable solution thanks to its LoviSil® cross-bonding joint. One of the requirements was that old joints had to be replaced like for like, without letting in new cable or using extra joints. This was possible thanks to LoviSil® technology. Existing joints were broken down, removed and the cable split at the connector, after which the new connection could be installed. The new joints enabled sequential bonding of the conductor screens to reduce losses.

Lovink Enertech trained its jointers for this LoviSil® cross-bonding technology and oversaw initial installation activities. In the meantime, dozens of joints have been replaced and the first measurements show that losses are negligible. In short, the energy company is very satisfied with the use of LoviSil® cross-bonding joints, which have allowed it to introduce a new load distribution concept in the cable grid. 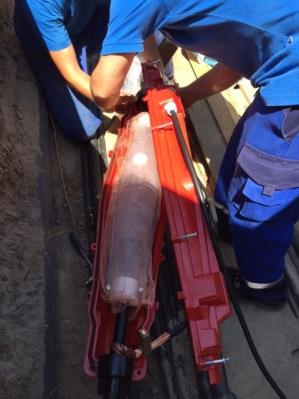